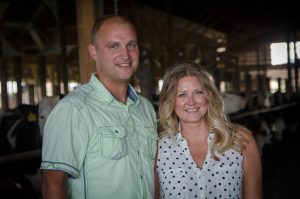 Just five miles west of Lake Huron rests Prime Land Farm, where Darrin and Barbara Siemen are pioneering their own path for their farm, their family and even agriculture promotion.

The Siemens were named the 2016 MMPA Outstanding Young Dairy Cooperators (OYDC) after attending the OYDC conference in late August. They own a dairy, beef and sugar beet farm in Harbor Beach, Michigan.

Ever since he returned home to the farm after college in 2001, Darrin has assumed a large role in the farm and the couple took over full ownership in January 2013. The fourth generation farmer has followed his parents example, and continued the progressive charge on the whole operation, in many areas from milking to breeding to cropping. And standing by his side through the process is Barbara, who has built her own niche on the farm and in the agriculture community.

At first, they continued to use the old parlor to milk a select group of cows. They began phasing out the parlor, but found their four robots were not enough to keep up with the needs of their herd. Darrin called the AMS supplier and in less than a month a fifth robot was added to the “tollbooth” setup in their freestall barn. The barn is arranged with robot rooms parallel to each other on either side of the feed alley. As the herd continues to grow from within, the Siemens have a plan to add a sixth robot in the near future.

Though the transition was not easy on the cows, today they have adjusted to the robots. The atmosphere in the barn is tranquil as cows enjoy the freedom to eat, drink, rest and be milked when they please. The cows are milked an average of 3.2 times per day.

“The cows are way more relaxed now than before the robots.” Darrin said.

“Our cows are so content, you can see them laying in their sand freestalls just chewing their cud,” Barbara added.

The Siemens also found milk quality improved after the switch due to better consistency. The cows now know what to expect when they are milked and the farm does not need to worry about employees being inconsistent. In 2015, the Siemens averaged a somatic cell count of around 140,000, a lower count than their quality figures five years prior.

Other sustainable practices include geothermal heat, reclaimed water across the operation and cover crops. Several years ago, the farm installed solar panels and are now pricing out additional solar panels to feed energy into the grid to generate what they use.

Led by his parents progressive example, Darrin’s first major change after returning to the dairy was to the cows themselves.

“As a kid, we had only purebred registered Holsteins. But as the farm moved commercial, I noticed more herd health issues,” Darrin recalled. “After graduating from college, we began crossbreeding to build a more durable herd.”

In pursuit of this goal, they artificially inseminated their Holsteins with Montbéliardes. The next generation was bred with Swedish Red and then with Holsteins, using colored ear tags to monitor where each cow was in the cycle. The crossbreeding program has reduced illnesses and eased calving difficulties.

But when they reached Holsteins again, the calving issues returned. Now Darrin is breeding his virgin heifers with Jersey. It’s a move to continually improve herd health, but one also well-approved by the next generation.

“I like Jersey calves!” the Siemen’s seven-year-old son, Riley, piped in, describing his favorite calf whom he affectionately named Wiley.

Riley and the Siemen’s two other children—Elliott and Adrienne—help out with chores by feeding chickens and goats in the morning each day before school. The kids are also on the monthly schedule to feed calves, along with the farm employees. To Darrin and Barbara, it’s important the children develop good work ethic by being involved in the family operation.

Barbara ensures the kids stay involved and the family stays close. She focuses on the needs of the family, handles bookkeeping for the farm and pitches in wherever needed.

“I do whatever is necessary.  I know because I do what I do, Darrin is available to do what he needs to do for the farm,” Barbara described. “The majority of the time he can focus on the farm and not worry because I am taking care of the family and finances. He gets the best of both worlds.”

On top of that, Barbara runs a business of her own: The Chick Wire. A self-described “agvocate,” she began promoting agriculture and dairy ever since she married Darrin and moved to the farm. In 2014, she began blogging as Farm Barbie to open up the life of her family and farm.

The blog gathered a decent following and Barbara used the space to connect with consumers and give them a name and face to a farmer. However, she was unable to retain using the name because of a trademark dispute. Despite putting up a tough legal fight, ultimately she was forced to change her name. But she did not just change her name, instead she used the opportunity to refocus and found a new project.

“I wanted to rise above this situation and use my struggle for good. I am now using my literal voice for agriculture, when they wanted to shut me down altogether,” she explained.

The Chick Wire, as Barbara outlines, is a network of women that shares values, cultivates understanding, and inspires without judgment. She interviews women on podcasts—digital audio files posted on the internet for downloading—to share their stories through “values-based messaging.”

Barbara’s concentration on women is strategic. She says she’s learned studies show millennium moms are an influential audience and she is trying to reach that group specifically. The women she has interviewed—such as the bee keeper or the athlete—are used to bridge the agriculture community with consumers and eliminate the “ag vs. everyone” mentality.

“Through all of these women I am interviewing, there’s a common thread, an agricultural foundation. I’m reaching a new audience with each episode because her friends and family tune in to hear her, then they hear the tidbits about ag that I share. This allows listeners to begin to understand and trust,” she adds, explaining how her podcasts promote agriculture.

To the Siemens and many in the agriculture community, farming is about family. They enjoy working with family, something Darrin admits can be easy to take for granted.

“I was immediately attracted to farm life because of the strong family aspect,” Barbara, the former “city girl” revealed. “I enjoy the family and intergenerational focus. Our kids get to work alongside Dad and Grandpa. Not many kids get that opportunity.”

This emphasis is important when considering the future and with each pioneering move.

“Our goal for the farm is to grow as we can in beef, dairy and land,” Darrin explained. “We want to be able to give the next generation—our children—a chance.”

More about Darrin and Barbara Siemen

Owners of Prime Land Farm in the Huron Local, District 8

Agriculture, Dairy and Community Involvement: Darrin is the past president of the Huron County Farm Bureau and served on the board for nine years. He has also been on the Sand Beach Township Planning Committee and a basketball coach for Harbor Beach Community Schools. He has served as a delegate for his MMPA Local, and is also a delegate for United Producers Inc. Barbara is an MMPA Dairy Communicator and was also involved in the Huron County Farm Bureau. In addition to The Chick Wire, she has promoted agriculture by guest blogging and being involved with various programs such as: Common Ground, Ask the Farmer, AgChat Foundation, Michigan Agriculture Council and the Pure Michigan blog. The farm was involved in the 2016 AgVenture Day in Harbor Beach.

This article originally appeared in the October 2016 issue of the Michigan Milk Messenger.