In 1950, MMPA realized the importance of shining the spotlight on a farm family who was progressive in their management practices, above average in their leadership skills and were pillars of their community. And so began the Outstanding Dairy Couple competition.

Since its inception several members have been honored through six decades with this title that has changed from Outstanding Dairy Couple to Outstanding Young Dairy Cooperator (OYDC).

Some things have changed while others have stayed the same explains Sheila Burkhardt, MMPA senior director of member and government relations.

“The MMPA OYDC program has been an integral part of MMPA’s history over the years and has played a key role in the strength and success of our cooperative,” she says. “We have made a few changes to the program over the years, but the intention of the program is to identify and develop young dairy leaders has remained.”

Sixty-six years ago, Anthony and Mary Kreiner of Brown City were the very first Outstanding Dairy Couple deemed worthy of the title by a panel of judges and went on to represent the MMPA at the National Milk Producers Federation’s annual meeting in Minnesota.

In 1964, Harold and Lillian Gremel of Sebewaing were gracing the cover of the Michigan Milk Messenger as the Outstanding Young Dairy Couple.  Starting from scratch in 1953, this young couple purchased their first farm entirely on credit with Harold’s dad standing behind them to get a loan.  There was no family partnership, no chance to share machinery and no one to bail them out if they got into trouble.

While the place they bought was set up for crops and hogs, it did have three shorthorns that came with it and that was the beginning of their herd.  Harold added his one Brown Swiss and Lillian added her 4-H project, a Holstein, and a couple of years later they were up to ten cows and ten sows.

Today, Starward Farm is run by the second and third generations: Harold and Lillian’s son Walter, son-in-law and daughter, Darwin and Kathy Sneller and grandchildren Eric and Cassie Sneller. 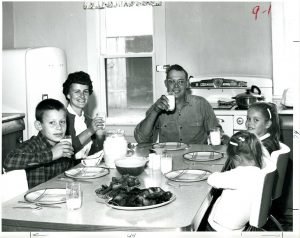 “Having an informed and involved membership has been an important component of MMPA’s success over its 100 years,” Burkhardt explained.  “The OYDC program provides the opportunity for our younger members to be exposed to the state and national issues impacting the dairy industry while gaining a greater understanding of the role of MMPA in the marketplace. MMPA has been fortunate to have great OYDC representatives over the years who have gone on to be leaders within MMPA, other agriculture organizations and their community.”

Bruce and Jennifer Lewis of Pleasant View Dairy, in Jonesville and were named OYDC in 2005. Jennifer explained the benefits of the program, “It’s very important to be involved in your co-op at any age. The OYDC program at MMPA gives younger members the chance to experience everything the co-op offers to its members plus the additional opportunity for leadership development. That experience gained gives these members a better understanding of the decisions our co-op makes and opens doors for personal involvement down the road. Not to mention the networking gained from others involved in the program.”

Bruce and Jennifer have taken that leadership piece a step further holding leadership positions in MMPA and Farm Bureau. And in 2013 the Lewis Family was named the Michigan State University Dairy Farmer of the Year. This year, she returned to the OYDC program by serving as one of three judges in the selection of the 2016 OYDC Darrin and Barbara Siemen.

Networking with other young dairy farmers was an important piece of the puzzle for Lyn Horning of Horning Farms in Manchester.

“I liked meeting the other OYDCs. When we were in the program I was still very ‘new’ at dairy farming. I only knew what was happening on our farm.” Lyn continued, “The OYDC program is a great way to learn more about our co-op and discover all it does for us. It is also an opportunity to network with other dairy farmers our age and discuss our ideas—those that worked and even those that didn’t.”

Lyn and her husband, Jeff, were named OYDC in 2004, and thirty-four years after Jeff’s parents, Earl and Diane, were the OYDC.  Time will tell if the next generation will follow the two earlier generations in becoming OYDC. Jeff’s daughter, Katelyn, and her husband, Joe Packard, have joined the Horning Farm operation as the sixth generation.

From members who are young and full of ideas to mature and experienced members, MMPA has molded 100 years of success around every member of the co-op because they realized no matter what age or stage, they are stronger together.

This article originally appeared in the October issue of the Michigan Milk Messenger.