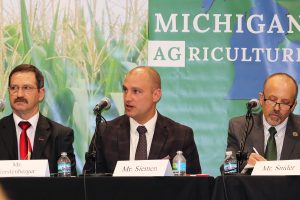 FRANKENMUTH, MI – Dairy farmers in Michigan and across the nation need federal lawmakers to revise the safety net created in the 2014 Farm Bill to provide them adequate risk management protection, according to a dairy farmer from eastern Michigan who testified in Frankenmuth on Saturday at a Senate hearing.

Darrin Siemen of Harbor Beach, Mich., told a Senate Agriculture Committee field hearing held at the Saginaw Valley Research Center that the Margin Protection Program (MPP), created in the 2014 Farm Bill, “has failed to deliver the protection farmers need and expect. While MPP remains the right model for the future of our industry, changes are needed if Congress wants to prevent dairy farmers like me from going out of business,” he said.

Siemen is a fourth‐generation family farmer and owner of Prime Land Farm in Harbor Beach, in Michigan’s Thumb region. He testified on behalf of his cooperative, Michigan Milk Producers Association, as well as the National Milk Producers Federation, of which MMPA is a member. His full testimony can be found here.

Siemen said that the MPP is designed to help farmers insure against either low milk prices or high feed costs, but the way the program calculates the relative value of feeds such as corn, soybean meal and hay was “significantly changed” as it was written into law. This change “fundamentally altered the safety net designed by NMPF and other dairy leaders around the country. Unfortunately, as a direct result of these changes, the MPP safety net has failed to deliver the protection farmers need and expect,” he said.

He explained that in the first two years of the program, 2015 and 2016, farmers have paid $90 million in fees and premiums to USDA while receiving only $14 million in insurance payouts, even though margins have been tight during much of that period. This has led to a drastic reduction in the number of farmers paying premiums to selecting higher levels of margin protection. Most are now only paying the minimum annual $100 administrative fee, for which they receive only a low level of insurance coverage.

“I am not asking for a program that guarantees a profit, nor do I want a program that will incentivize excess production,” Siemen said. “However, when Congress made changes to the program, rendering it ineffective, dairy farmers like me lost faith in the idea that MPP could serve as a viable risk management tool under its current formulation. If Congress makes changes to ensure that MPP more accurately reflects the actual costs of production for businesses like mine, participation in the program will increase.”

Siemen said that in addition to adjusting the feed cost formula and the data sources for the prices of feed and milk, Congress should reassess the MPP’s premium rate structure, and consider expanding access to the Livestock Gross Margin program, a separate risk management tool offered by USDA.

The combination of suggested changes to the MPP “will require this committee to make significant and necessary improvements to the program,” Siemen said, so that “it functions as intended and that producers participate in the program. A safety net is not a safety net if no one participates.”

Siemen pointed out that dairy farmers are also facing other policy challenges, including immigration and labor shortages, tax reform, child nutrition and environmental sustainability. He thanked Senate Agriculture Committee Ranking Member Debbie Stabenow for arranging the hearing in Michigan, and for her engagement on behalf of the U.S. dairy sector in its recent struggle against Canada’s new pricing policy, which will have long-term negative consequences for Michigan farmers’ export opportunities.

He also recognized the efforts of Stabenow and Senate Agriculture Committee Chairman Pat Roberts for their recent efforts to bring more milk options and flexibility to the School Lunch and School Breakfast programs.

About the Michigan Milk Producers Association

The National Milk Producers Federation, based in Arlington, VA, develops and carries out policies that advance the wellbeing of dairy producers and the cooperatives they own. The members of NMPF’s cooperatives produce the majority of the U.S. milk supply, making NMPF the voice of dairy producers on Capitol Hill and with government agencies. Visit www.nmpf.org for more information.