While dairy farmers are experts in their field—literally—and know these ABCs by heart, outside the agriculture sphere, these concepts aren’t as familiar to all. Enter Rebekah Rubingh, MMPA member dairy farmer and former elementary school teacher, who set out to provide education on dairy farming to children with A Dairy Farm ABC Book.

Flip through the pages of the book and you’ll see photos of silos and tractors, dip cups and ear tags, all showing scenes of Rubingh’s Dairyland and the Rubingh family. The 350-cow dairy is managed in part by Rebekah’s husband, Jarris, the fifth generation on the farm. Recently Rebekah and Jarris were recognized by MMPA as the 2017 Outstanding Young Dairy Cooperators (OYDC) Runners-Up for their on-farm accomplishments and leadership.

A budding photographer, Rebekah says she started the ABC book to put many of her photos of the farm to use. So, she put together a Christmas book for personal enjoyment. “I took it to the farm to show dad. Dad said, ‘this is good, you need to get this published,’” she recalled. Funding from the MMPA Upstate Local allowed her to publish the book and it is now sold in bookstores, available in libraries and shared in classrooms.

“Jarris gave me ideas for the letters like q and z,” she explained. Thanks to Jarris, Q became “quality” and Z became “Zip,” the name of one of their bull calves.

Though a published book about dairy under her belt may suggest otherwise, when Rebekah first met Jarris, she wasn’t exactly a seasoned dairy farmer. “Completely lost,” as she put it. Jarris, on the other hand, has lived and breathed dairy all his life. Their marriage in 2009 brought her up to the family’s dairy farm in Ellsworth, Michigan.

The couple manages two locations down the road from the main farm, raising young stock and overseeing cropping. Jarris returned to the farm after graduating with a degree in agriculture business from Dordt College in Iowa. In completing his senior research project, he observed other farms’ milking routines and brought back ideas to his farm to standardize procedures.

Overall, the Rubingh’s focus is on continually improving their farm and the product they produce: milk. “My product must be good enough for me and my family before I can sell it to anyone else,” Jarris asserted.

In 2016, the farm was one of only 38 MMPA farms to earn a gold quality award. To achieve a gold award, farmers must maintain low bacteria counts for the entire year, including keeping somatic cell count lower than 100,000 for the entire MMPA fiscal year. In the last five years, Rubingh’s Dairyland achieved two silvers and two bronzes before attaining the top award. 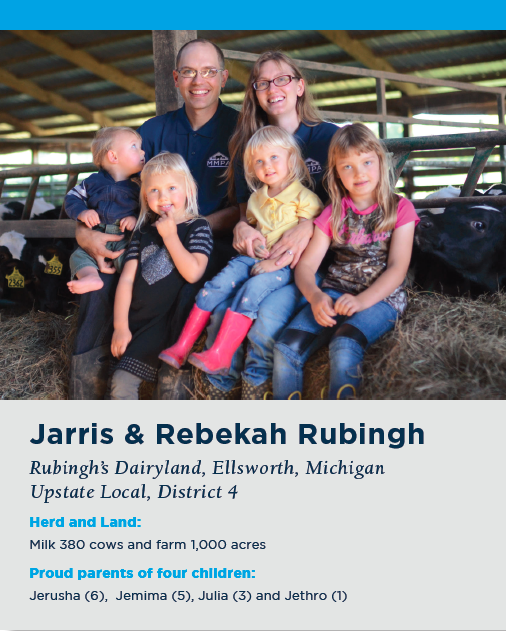 “Our milk quality is the result of a team approach,” Jarris said. “From nutrition to genetics to high quality feed to milking procedures, a lot of factors go into achieving high quality.”

The genetics side is where Jarris makes his mark. He and his brother Daren work to improve genetics of the herd of registered Holsteins by performing genomic testing. The testing provides predictions about the capabilities of the bull’s children, including health, production yield, calving and type traits.

“We have primarily used genomic proven bulls in the last 5-10 years. Today we have 23 cows in the top 1 percent in the nation as far as genetics go. Plus, 50 percent of our herd is in the top 20 percent of the nation genetically,” he relayed.

The farm’s breeding program centers around maximizing butterfat and protein components in their herd’s milk. The milk their high performing cows produce averages 4.1 percent butterfat and 3.2 percent protein, with an average production of 76 pounds of milk per day. “Not many herds are that high,” says Jarris.

Rebekah enjoys naming these high performing cows upon birth to stretch her creativity. She readily named off a few of her favorites. There’s Twist, Oreo and Chocolate. Plus, Othello, Desdemona, Hercules and even Runaway for the calf always looking to escape.

Looking ahead, Jarris and Rebekah have a goal of taking over the farm in the next ten years and be profitable enough that any member of the family can be involved if they chose to be. For now, they enjoy their role as dairy farmers. “The best part of being a dairy farmer is working outside and being close to my family every day,” Jarris admits.

Rebekah, a graduate from Cornerstone University with a degree in elementary education, enjoys the farm for the opportunity to continually learn and use her skills to promote the dairy industry. She works hard alongside Jarris on the farm while also homeschooling the sixth generation and dreaming up plans for book number two.

The couple is involved in Michigan Farm Bureau, with Jarris as the current president of Antrim County and Rebekah participating in discussion meets and the promotion and education committee. In 2014, Rebekah was named the Michigan Farm Bureau Agriculture Promoter of the Year. Rebekah is also an MMPA dairy communicator.

Rebekah, with the help of Jarris, penned the ABCs of dairy farming all the way to the XYZ. But for the farm and life of our 2017 OYDC Runners-up, the future is still unwritten.

“X is for extra special care. Y is for yellow cornstalks. Z is for Zip.”

This article originally appeared in the November issue of the Michigan Milk Messenger.

Selection for the 2018 Outstanding Young Dairy Cooperator program begins this winter during local meetings. If you are interested in participating in the program, contact your local.