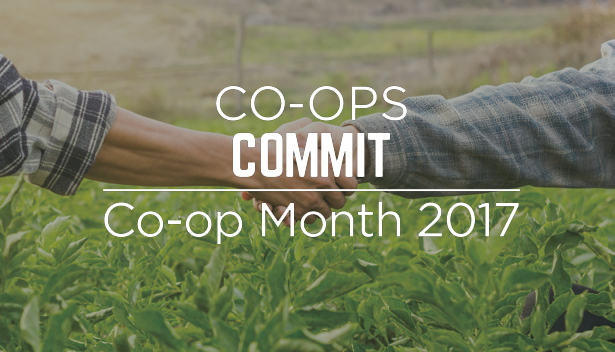 Hoard’s Dairyman made a prediction in 1916 and 101 years later that prediction is still coming true.

After attending the very first MMPA cooperative collaboration of nearly 400 of Michigan’s dairy producers, Hoard’s Dairyman reported, “If the temper of the milk producers present at this meeting is evidence of the feeling existing generally among their neighbors, we believe the new organization will grow in strength and its members (will) stand shoulder to shoulder in the cooperative endeavor.”

Today, MMPA is steamrolling forward with the primary goal of marketing members milk to the greatest advantage possible. Standing shoulder to shoulder in 2017, MMPA celebrates October as Cooperative Month and strives to be the quintessential reflection of the 2017 theme: Co-ops Commit.

While the cooperative birthing process produced a vibrant association filled with passionate members willing to work hard for the good of everyone, it was hardly pain free. The creation of MMPA brought criticism, distrust and doubt as skeptics called for new leadership of the cooperative and wanted the bylaws amended to a more simplified form. In the 1930’s, meetings were held by farmer groups around the state of Michigan and MMPA was the punching bag for the frustration of low milk prices and high feed costs.

But the leadership stood committed.

MMPA President Hull encouraged the members to stand committed with him, as they faced lower milk prices and higher input costs and this was just the beginning of the Great Depression.  Morale was low in every industry but as a committed leader of the co-op system he gave the producers a pep talk as they concluded a delegate meeting in October of 1931:

“I have tried to lay before you the absolute truth of the situation as it prevails at the present time. These are dreadful times, but we are going to come out of them. Let us be wise and prayerful and try to bring agriculture out of these times in the best way we can and in doing that we will have done our duty as men, and that is all that angels can do.”

The cooperative commitment that MMPA has shown over the past 100 years has led to a full slate of benefits to the membership. MMPA does not have to answer to outside shareholders but can focus on meeting their member’s needs. The MMPA co-op is also a reflection of a democracy in action.  They are uniquely controlled by a board of directors, elected from the ranks of the membership and they hire and direct the management and are ultimately responsible to the members. With this kind of structure, commitment to the membership is paramount and is a natural by-product of a solid cooperative. 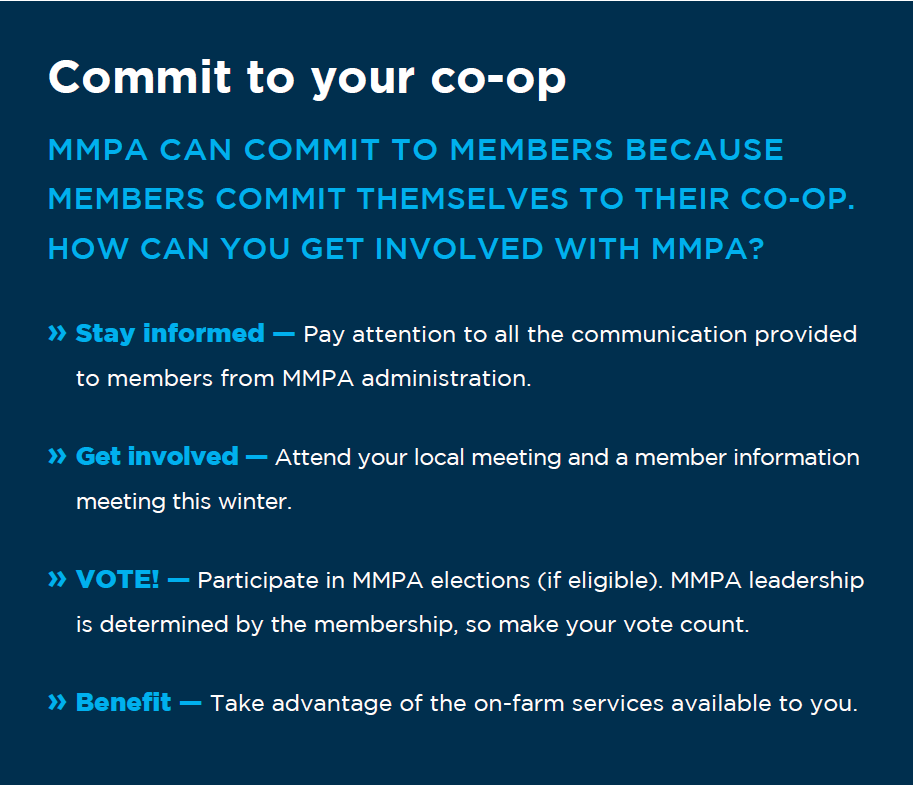 MMPA has taken it further than just marketing milk. They have expanded their vision to offer their membership several programs to meet their business goals. From a FDA certified laboratory to energy audits to herd health assistance to equipment evaluation to training, the member services team is providing on-farm support with a goal of putting members first.

On farm management is crucial for a successful dairy, but MMPA allows for personal growth among their members as well. Pride in ownership, responsibility in leadership, accountability in stewardship are all characteristics that are honed as a result of being a member of a co-op like MMPA.

The success of MMPA through the years has been driven by an informed and engaged membership. MMPA provides leadership opportunities for members—starting with youth development programs all the way up to the MMPA board of directors. Programs include leadership positions at the local, district and state levels, the 4-H Milk Marketing Tour, scholarships, Outstanding Young Dairy Cooperator program and the Dairy Communicator program. Further, MMPA advocates on behalf of members to legislators and runs the Michigan Milk Political Action Committee.

From the responsibility of being on the board of directors to promoting milk at the local public school to donating thousands of gallons of milk to a nutritionally deficient and impoverish city, members are called to grow, manage and give as they receive a reliable milk market for their high-quality product. A century of commitment produces a century of success.

What does a co-op commitment look like? MMPA: One hundred years and still going strong.

This article was originally published in the October issue of the Michigan Milk Messenger.