Just a group of farmers in Livingston County formed a milk co-op that would grow and last for 100 years.

Just a handful of farmers have led MMPA through 100 years of victories and defeats.

Just a group of farmers stood up against rioting teamsters and kept the integrity of their cooperative strong.

Who could call these forward thinkers, ‘just farmers?’

The size, shape and impact of farming has evolved over the years but the tenacity and determination of the farmer has not. The farmer has been labeled, ‘Just a farmer’ by his own humility and faded jeans, but the recognition of their vision is something to be applauded.

The first cooperators of MMPA must have known they were more than just owners of cows and producers of milk. And they must have envisioned themselves as more than farmers but milk marketers and leaders with political savvy. In fact, many of them held off-farm occupations but wanted to make sure their blood, sweat and tears spilled on the farm were not in vain. Thus deciding to ban together and market their product.

MMPA’s leadership in the early years was pivotal not only at the local level to the membership but nationally.  Milo Campbell, one of the original MMPA board of directors was the first president of the National Milk Producers Federation (NMPF). When the NMPF formed in 1916, the Branch County farmer headed to Washington D.C. to lead the group until 1923. And no grass grew under Campbell’s feet as one of the first pieces of legislation proposed by NMPF was to officially grant cooperatives limited exemption from federal antitrust acts. That legislation was passed in 1922.

Ten years after Campbell vacated the NMPF presidency, MMPA’s first president, Nathan Hull took over and led the NMPF until 1941. In 1955, North Branch dairy farmer Glenn Lake took over as president of MMPA and was the third MMPA leader elected president of the NMPF. Today, current MMPA President Ken Nobis is the first vice-chairman on the NMPF board.

Lake took office and was initiated into leadership by a group that attempted to undermine the effective work of MMPA in bargaining for members. The Fair Share Bargaining Association, Inc., was philosophically the direct descendent of the United Dairy Farmers and included many of the same people.  The “Fair Share” farmers were aided and prodded into action primarily by the Teamsters Union and other affiliates of the American Federation of Labor and the Congress of Industrial Organizations.  Outside agitators influenced inside MMPA members until they became disgruntled and demanded transparency of the association records in hopes of proving a failure of the cooperative to abide by their constitution.

It was reported in MMPA’s 50th Annual Report that the “Fair Share” group filed a complaint against MMPA with the U.S. Department of Justice and as a result a U.S. Grand Jury investigation was conducted but found nothing. But the “Fair Share” organizers weren’t done yet.

“The services of a firebrand former preacher and deposed labor organizer who had been active in the United Auto Workers union during the days of the sit-down strikes in Michigan auto plants were secured.  The teamsters announced they would provide money, muscle and guidance to organize the dairy farmers. The “Fair Share” group had infiltrated and become entrenched in the democratic governing system of MMPA and, using “fifth column” tactics, tried to take over.  This effort culminated at the Annual Meeting in 1955 when the “Fair Share” converts moved into the open and attempted a virtual coup. They were unsuccessful, but the activities of some leaders who supposedly had been loyal members of MMPA for years was alarming.”

This didn’t stop the “Fair Share” movement as they urged dairy farmers to strike in the spring of 1956 and violence erupted when milk trucks belonging to MMPA and to private haulers were hijacked and herded to MMPA’s Imlay City plant.  Other MMPA plants and facilities were sometimes blocked by “Fair Share” protestors. 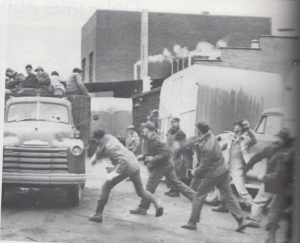 Shortly after these attacks, MMPA members, out of patience and disgusted with the behavior of these renegades, considered responding in kind by physically driving the rioters away from MMPA property and moving milk to market with whatever brute force was necessary.

Instead they worked it out legally, but it was the determination of loyal MMPA members and law-abiding farmers that turned the tide and convinced the “Fair Share” fanatics that they could not prod dairy producers into fighting amongst themselves.

Two lessons were learned after that tumultuous time: Member loyalty to the association was paramount and that in any confrontation it is absolutely essential to act legally and morally without resorting to violence.