James Weber is ambitious, yet cautious. In 2015, not long after graduating from California Polytechnic State University, he did something you don’t hear too often anymore: he started a dairy farm.

On former pastureland in Millington, Michigan, Weber erected a double 10 parallel milking parlor, sheltered by a solar panel covered roof. Just a short walk away, he built a hoop barn to house 130 Jersey cows trucked in from Battle Creek, Michigan. He’s a new player in the dairy community, but he’s cognizant of the current dairy economy and strategically managing his farm with insight from mentors and family legacy.

In recognition for his achievements, Weber was recently named the 2019 MMPA Outstanding Young Dairy Cooperator by a panel of judges represented by leaders in the Great Lakes dairy industry. Owner of Weber Family Dairy, he milks 130 cows and farms 800 acres as an MMPA member of the Frankenmuth Local in District 7. 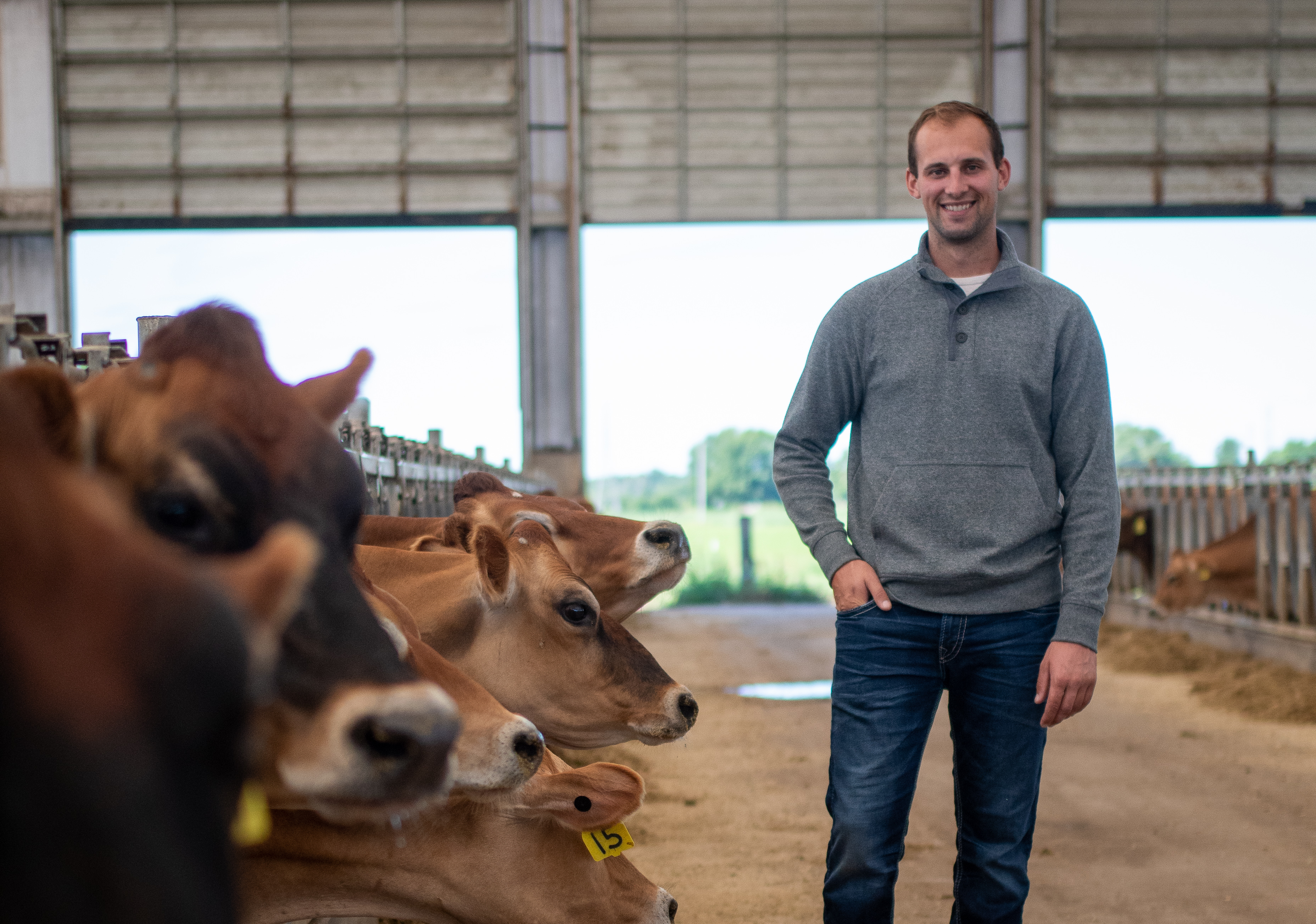 Before starting the farm, Weber received a dairy management certificate from Michigan State University. An internship sent him to work on a California dairy farm and he stayed out west for a few years working on several dairy farms. He eventually graduated from California Polytechnic State University with a bachelor’s degree in dairy science.

When he returned to Michigan, he knew he wanted to stay a part of the dairy community. But Weber didn’t want to just work on or for a dairy farm, he wanted to own it.

“It always came back to ownership. I don’t like being told what to do or how to do it. And I have that freedom with my own farm,” he said. “When I get something in my mind that I’m going to do something, I’m going to do it.”

The dairy side of the business is one of four entities owned by Weber and his family, alongside Weber Farms, Weber Land and Weber Equipment. Weber’s dad managed Weber Farms with around 40 Holstein cows until selling out in 2011.

“MMPA was the co-op my grandparents joined, the one my dad was with,” he said. “When I started this farm, there was never any thought of a different co-op, it was, ‘Who do I call at MMPA?’”

Weber’s tenacity pushes him forward, but his prudence is driving his success. He keeps his production costs low, makes his decisions based on numbers and uses what he’s learned from mentors to his benefit.

Weber credits much of his knowledge and passion for dairy to his family, his core teachers at MSU and the families he lived with on dairies in California. “I know that I wouldn’t be where I am without their support and influence,” Weber said.

While working on Tollcrest Dairy, a dairy farm in California, Weber developed many of the skills he’s now using to manage his own farm. “That was one of my biggest influence and role model. The owner started his farm off on his own. I learned a lot from him and I’m trying to use what I learned out here.”

Though the buildings are new, the parlor is new, and the farm itself was recently restarted, Weber didn’t go overboard with all the latest gadgets. Instead, he made strategic decisions about where he spent his money and how to sustain his farm with a lower cost of production.

“The only automation we have in parlor is the detachers. We don’t do individual cow milk weights. We don’t have herd management software. I manage the cows on a breeding wheel and excel sheets. It works on small scale,” he said.

If he undergoes an expansion or shifts away from personally managing the cows, Weber says there’s technology he would like to implement. The first step would be to grow his herd to around 400 and then upward from there. When developing the property, he planned out the current structures with an idea of where the next barns would go. But for the moment, he’s waiting until the numbers make sense.

“Following my gut and what I think is right has proven to work for me,” Weber said.

The farm’s mission, Weber says, is to produce a safe, nutritious product. Beyond that, he wants to ensure his employees are happy and that they are protecting the farm’s natural resources.

Weber is continually thinking about how he can efficiently produce quality milk and have a sustainable farm. For example, the cows rest on beds of recycled manure solids. Weber says one day while thinking about his next move and considering how to store his manure for a potential expansion, he noticed his compost pile.

“I was just looking out there at the compost pile. With 130 cows, it was three and a half feet deep. I realized, well there’s my bedding for a future free stall barn right there,” Weber said.

While he ended up putting his expansion plans on hold, his bedding and manure storage solution stuck. And it works without damaging his milk quality results.

“My cows lay on their own manure.  It’s not a low pathogen environment, yet we’re able to achieve good milk quality,” Weber said. “That’s through understanding the relationship to the animal, her health and how somatic cell comes into play.”

While Weber leads his farm, as a member of MMPA, he also has an ownership stake in the co-op, something he doesn’t take lightly. He’s a delegate for Frankenmuth Local and has served on the resolutions committee, the District 7 nominating committee and as a delegate.

As an OYDC, Weber is hoping it will lead to greater involvement in MMPA. OYDCs often go on to hold leadership positions within their community and cooperative.

Weber attended the initial OYDC conference in August with fellow OYDC finalists. They had an opportunity to look into their cooperative through discussions with co-op leaders and a tour of the offices and milk testing laboratory. Moving forward, Weber will represent MMPA at national dairy meetings, serve an honorary term on the MMPA Advisory Committee and influence the MMPA Young Cooperator program.

Weber says he’s looking forward to representing MMPA, along with enjoying fellowship with members and forging relationships with industry contacts.

“My focus has always been on the farm, being efficient,” Weber said. “So what do you do after you accomplish the things you want on your farm? Well, how do you influence the survivability of your farm beyond just what’s on your farm? You go out and you work in the industry in whatever capacity you can.”

This article was originally published in the September/October issue of the Milk Messenger. Subscribe »