Think about all the problems you solve in a typical day. There’s the electric bill to pay, creative solutions to uncover at work and finding time for that dentist appointment. If you’re a parent, you might help your daughter navigate endless math homework. If you’re a dairy farmer, you might spend time thinking about how to nudge down your quality results.

But what if resolving all these problems was clouded by one thing? What if you didn’t know where your next meal would come from?

“When you’re hungry, you only have one problem. You don’t have seven problems. And until you solve that, your mind is not free to think about those seven problems,” Dr. Phil Knight said.

After experiencing a life upset several years ago, Knight found himself struggling to feed his family. “I did everything right. I worked two jobs. I have a doctorate.” Yet he couldn’t make ends meet.

Knight is not alone. There are 1.4 million people struggling with hunger in Michigan. Today, he’s the executive director of the Food Bank Council of Michigan (FBCM) and helping bring food to people in need every day, just like the support he once received.

Made up of seven regional Feeding America food banks, FBCM alleviates hunger statewide through food distribution and advocating on behalf of their network.

“If I hadn’t had people and programs to get alongside me, I don’t know how I would have survived,” he said.

MMPA has partnered with FBCM since 2015 and distributed almost 250,000 gallons of milk across their network. In recognition of this relationship, MMPA honored the non-profit with the Valued Partner award earlier this year.

Helping the One in Seven

Across the United States, one in eight people are food insecure. In Michigan, it’s one in seven. Food insecurity, as defined by Feeding America, is a household’s inability to provide enough food for every person to live an active, healthy life.

Many of these people turn to the food bank for emergency assistance and they come from all walks of life. For FBCM, 47 percent have someone in the home who is employed, 27 percent are children, 19 percent are senior citizens and 4 percent are homeless.

Living under food insecurity brings “toxic stress” to the household and prevents people from thinking about solving any problem except hunger. A reliable source of food brings stability and leads to empowerment. “Because their mind is free, they can think about other challenges and opportunities,” he said.

With inadequate resources, people often need to make sacrifices when choosing where to spend their limited money. Food—or at least healthy, nutritious food—is an area that often suffers.

It Starts in the Field

Food banking is different than when the system started around 40 years ago. Knight says that back then any food solved hunger. Today, they’re focused on the quality of food.

FBCM helps their member food banks procure food through a centralized, efficient system. In 2018, they distributed 200 million pounds of food, 80 of which was fresh.

In many cases, FBCM procures fresh food through partnerships with farmers and food companies. Through the Michigan Agricultural Surplus System (MASS), they created a secondary market for produce that won’t be accepted by grocery stores due to size and shape. MASS is a grant program funded by the State of Michigan which allowed them to source over 12 million pounds of food last year, at a cost of only 12 cents per pound.

Kath Clark, FBCM director of food programs, works directly with farmers and donors to funnel food to the regional food banks based on the needs of their populations.

When the food can’t be used in Michigan within its shelf life, FBCM often works with Feeding America to distribute it out of state. This helps fight hunger elsewhere in the nation while supporting Michigan farmers.

“Our hungry neighbors here in Michigan are taken care of first. Then we want to take care of our farmers,” Knight said. “Solving hunger starts in the field.”

Clark says the food bank clients, who may not have access to fresh food on their own, love when produce or fresh milk is distributed. In one case, a senior citizen was amazed after FBCM was able to procure excess cherries.

“She hadn’t had fresh produce in years because her budget didn’t allow it,” Clark said. “Some people had dropped cherries and she was picking it up off the ground. She said, ‘That’s good food, I’m not going to let that go to waste.’”

For food banks in Michigan and across the country, milk continues to be one of the most requested items. But with a short shelf life and refrigeration needs, it can be a challenge to get milk in the hands of those in need.

In the summer of 2015, MMPA made the cooperative’s first large-scale statewide donation of milk–22,700 gallons to be exact. Since then, MMPA has made multiple donations of milk and more recently, cheese, all to FBCM. The donations were made possible, in part, through MMPA’s partnership with The Kroger Company of Michigan, who has donated processing and packaging for many of the donations. Determined to make the donation possible, FBCM found solutions to keep the milk cool and efficiently distributed across Michigan.

“It was a learning process for everyone. If MMPA wasn’t willing to donate the milk, we wouldn’t have learned. You made us better,” Knight says.

In the years since that first donation, FBCM and their member food banks have developed strong systems to accept and distribute milk, along with other needed items like eggs and cheese. 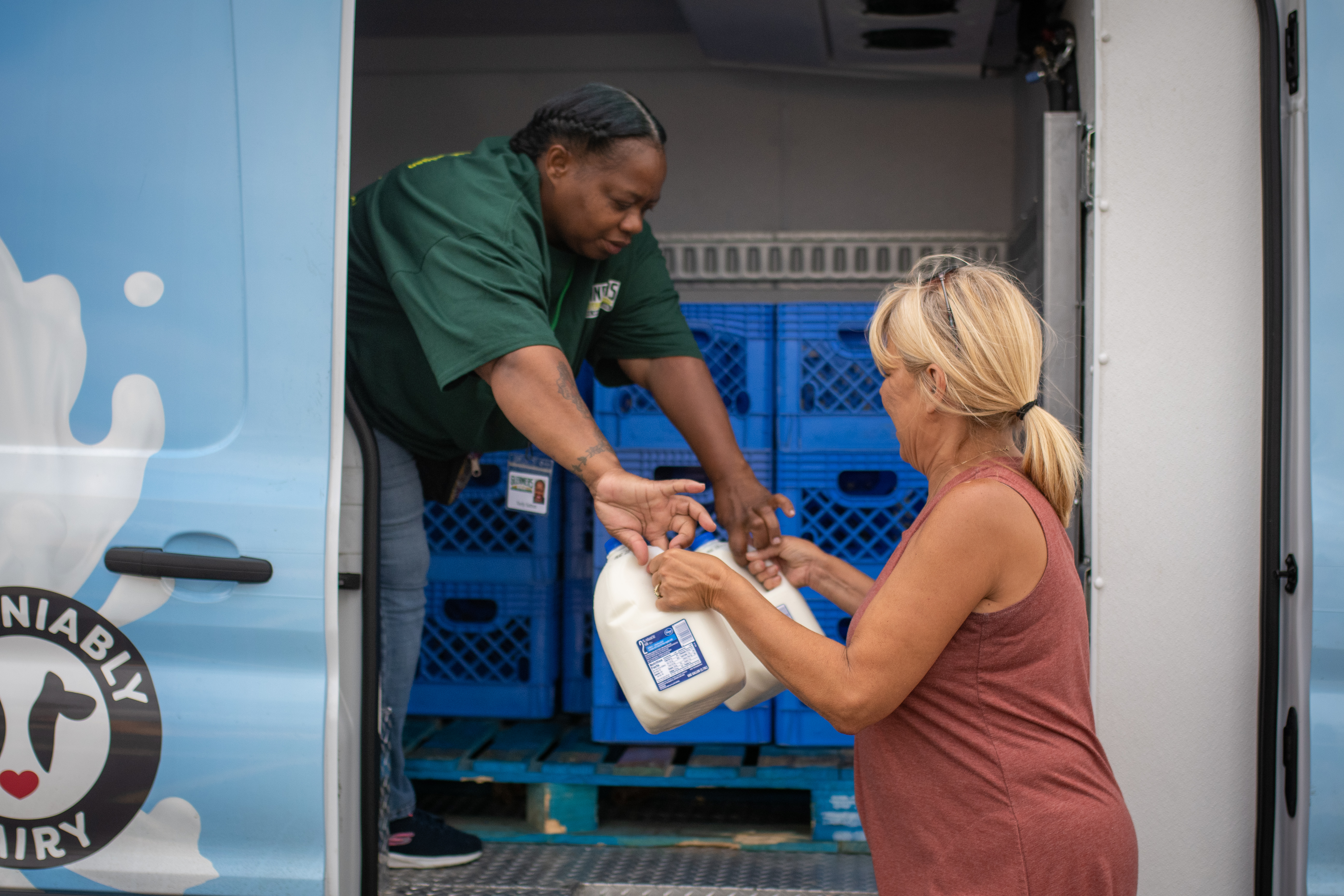 But after the MMPA’s milk donation initiative and a partnership with the United Dairy Industry of Michigan, they recognized the need to provide their clients with dairy and learned how to navigate the logistical challenges of distributing milk.

Gleaners has a refrigerated van and 24-foot box truck—both with Undeniably Dairy imaging to boot—dedicated to dispensing milk at mobile food pantries all over Southeast Michigan.

“Gleaners has distributed a total of 342,000 gallons of fresh milk through all our channels, which is just about 8 truckloads per month,” Beamer said of a recent 10 month period.

Beamer says many people served by Gleaners have limited access to affordable or good-quality fresh food, either because of transportation or economic challenges. Milk can be hard to come by or is often expensive and nearing the expiration date. With proximity to Michigan Dairy in Livonia, Gleaners can distribute milk directly to communities often the day after it leaves the plant.

One method involves mobile distribution centers like the ones used by Gleaners. “It’s a very effective way to distribute the food without a brick and mortar location,” Clark explained.

Through FBCM’s network, they can ensure food is distributed to every corner of Michigan. Hunger threatens every community and puts added stress on our neighbors, our communities and our economy. With every gallon of milk, MMPA helps FBCM inch closer to solving hunger.

“We want more food, more often, to more people. No one can do that better than the members of the Food Bank Council,” Knight said.

This article was originally published in the September/October issue of the Milk Messenger. Subscribe »